The monks now offer dried shiitake and oyster mushrooms.   Their dried and powdered mushrooms are available for sale in the Abbey Store. The White Oyster Mushrooms are also featured in select downtown Charleston restaurants. Cooking with dried mushrooms is easy.  Oyster mushrooms have long been cultivated in Asia for their medical benefits as well as excellent taste and are a rich source of B-Vitamins.   Dried mushrooms have a concentrated and powerful flavor, so you need less of them per recipe.

Food for Thought – Mepkin Abbey Fare is by Fr. Joe Tedesco, Mepkin’s current Superior. Before taking that office, Fr. Joe was Mepkin’s cook for many years. This book contains some of his favorite recipes. Attached is one of them – Two Bean Chili. Since the monks are mostly vegetarian, all of these recipes are vegetarian.

Chili is surely a favorite among so many and this recipe makes it easy to provide it more often.

In a large skillet over medium heat, cook and stir the mushrooms, peppers, celery, onion. And jalapeno in oil until onion is lightly browned. Add garlic, cumin, and oregano; cook and stir 2 minutes longer. Stir in tomatoes, beans, carrot, water, barbeque sauce, and chili powder. Cover and cook until vegetables are tender.

Both cookbooks are available on Mepkin’s web site on this page: https://mepkinabbey.org/mepkin-abbey-store/. 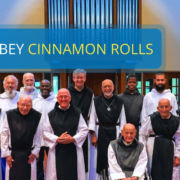